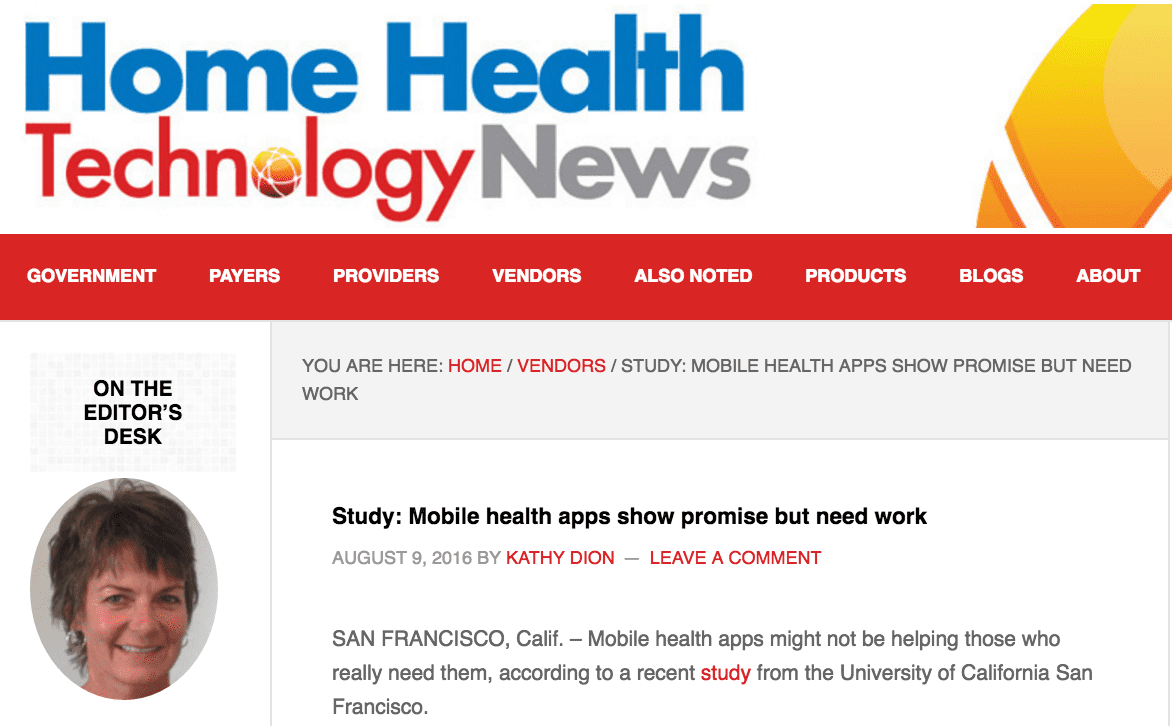 The study was conducted with 26 patients at The Priscilla Chan and Mark Zuckerberg San Francisco General Hospital and Trauma Center who were diagnosed with diabetes or depression, or who serve as caregivers for elderly patients. Researchers tested some of the highest-rated mobile apps that have been created to help individuals manage their medical concerns.

Three themes emerged: lack of confidence with technology, frustration with design features and navigation, and interest in having technology to support their self-management.

Those results are not surprising, said Jean Anne Booth, CEO and founder of UnaliWear, maker of the soon-to-be-launched Kanega watch.

“There’s a big difference between usability and desire to use,” Booth said. “Your average app developer won’t be able to put himself in the shoes of the user unless he spends a lot of time talking to those users.”

Participants in the study were given condition-specific tasks, such as entering a blood glucose value into a diabetes app. Data entry required significant effort for all of the apps tested, and participants struggled with that task. For 51 of 101 tasks, participants were unable to complete data entry without assistance. They had more trouble when it came to retrieving data from the apps, completing only 43% of those tasks across all 11 apps without assistance.

The study found that none of the apps tested appeared to have simple interfaces with large buttons and easy-to-follow instructions and navigation, which would make them more appealing to a broad age range and those with lower literacy.

“Usability is a problem, and the screen is a problem,” said Laurie Orlov, founder of Aging in Place Technology Watch. “People could become enthusiastic about apps, but, first and foremost, (app) designers must include them in the design process.”

Booth agrees. She said part of the problem with the development of today’s technology is that it’s being developed for technology’s sake.

“These days technology is being developed and then used to solve a problem,” she explained. “It needs to be the other way around—look at a problem and find the technology to solve it.”

Dr. Urmimala Sarkar, associate professor of medicine at UCSF, led the study. She believes that a number of design features could enhance the usability of mobile health apps for the populations studied: a clear rationale embedded in the design that reminds participants of the reason behind each task; use of simple language and graphics; fewer screens for completion of each task; and reducing the amount of manual data entry.

“To me, the most important lesson from our work is the importance of including diverse patients in the technology design process,” Sarkar said. “As in all aspects of medicine, our patients have a lot to teach us.”