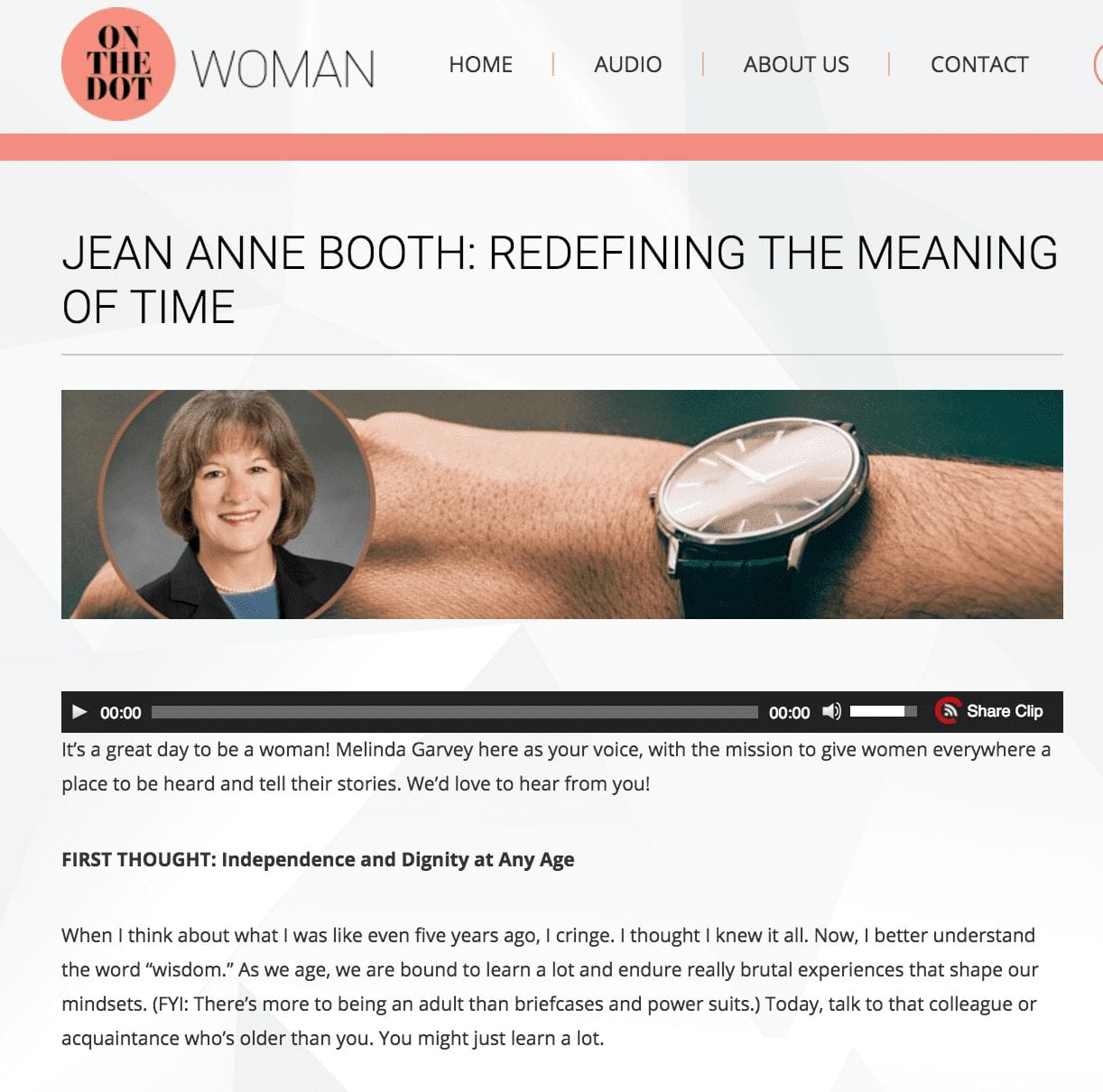 Jean Anne Booth: Redefining the Meaning of Time – Featured from On the Dot Woman

Jean Anne Booth was featured and listen to the complete audio clip here at the On The Dot Woman Website.

It’s a great day to be a woman! Melinda Garvey here as your voice, with the mission to give women everywhere a place to be heard and tell their stories. We’d love to hear from you! FIRST THOUGHT: Independence and Dignity at Any Age

When I think about what I was like even five years ago, I cringe. I thought I knew it all. Now, I better understand the word “wisdom.” As we age, we are bound to learn a lot and endure really brutal experiences that shape our mindsets. (FYI: There’s more to being an adult than briefcases and power suits.) Today, talk to that colleague or acquaintance who’s older than you. You might just learn a lot.

Dementia is a term used to describe the mental decline that is severe enough to interfere with everyday life, such as memory loss. Did you know dementia affects nearly 35 million people worldwide, and there are 7.7 million new cases every year?

Two mental-health professors who have long studied dementia note that keeping the brain active is a key component in fighting mental decline, and that men who marry intelligent women can reduce their chance of dementia.

So, gentlemen, get out there and converse with some smart ladies. It’s likely to keep your mental wheels turning.

Y’all, I’m super excited to tell you about one of the most groundbreaking entrepreneurs of our time and the winner of the 2016 Woman’s Way Pinnacle Award for Women in Technology, Jean Anne Booth. She is the CEO ofUnaliWear, the creator of a life-changing watch called Kanega. It was Kickstarter’s Staff Pick, collecting more than $110,000. While it’s no secret that it’s hard for women entrepreneurs to receive capital, Booth secured $3.4 million in seed funding for this inventive technology.

“Just for a watch,” you say? Think again. Focus groups called Kanega a wearable “OnStar for people,” because it provides 24/7 support for vulnerable people who may need help with medication reminders and accidental falls, and the watch acts as a guard against wandering. It’s perfect for the wise, older women in our society. In fact, Booth was inspired to produce the discreet device by her aging mother, who thought other medical alerts were ugly and stigmatizing.

Kanega has no awkward buttons to fumble with; instead, you operate it by speaking. It connects the user with nearly real-time support, which helps the wearer feel a real sense of independence. And unlike other smartwatches, like those from Apple or Samsung, UnaliWear doesn’t require the use of a smartphone. It’s built in!

Booth is no stranger to innovation. She was the founder of Intrinsity, the creators of the graphics chip in Apple iPad products, as well as the founder of tech company Luminary Micro. Booth sold her previous startups to Apple and Texas Instruments. Clearly, her finger is on the pulse of all things tech. She’s also involved in a global innovation platform called Aging 2.0, which seeks to improve the lives of the elderly through technology.

She’s also advocating for the next generation of girls involved in STEM studies, and serves as a coach and mentor to a team of 15- to 18-year-old girls for the nonprofit FIRST, an acronym for For Inspiration and Recognition of Science and Technology.

Booth says being an entrepreneur means knowing every single decision you make could destroy your company. But if you believe in what you’re doing and your product or service is making a difference, there should be no stopping you.

This tech boss has used her 30 years in the industry to solve a real-world problem that has the potential to help millions of our mothers, fathers, siblings and friends live engaged and dynamic lives. How transformative is that?

Ignore the wrinkles and embrace the people you’ve loved and the years of memories you’ve made. As 44-year-old Amy Poehler said:

“Stop whining about getting old. It’s a privilege.”

That’s all for now. Be sure to share this so more women can have a voice! Thanks for getting ready with us.