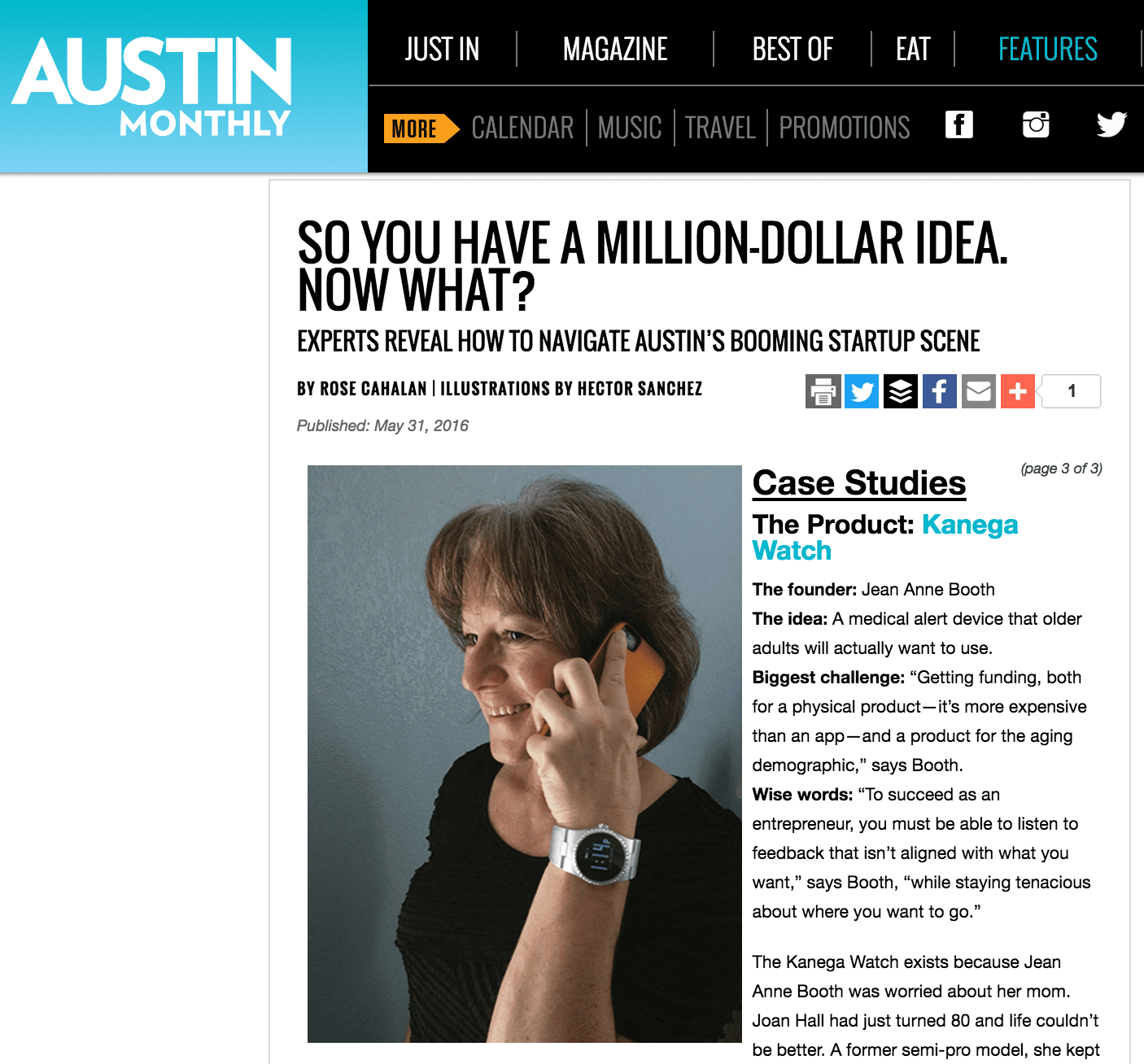 So You Have a Million-Dolla Idea. Now What? Experts Reveal How To Navigate Austin’S Booming Startup Scene

Jean Anne reveals how to navigate Austin’s Startup Scene as CEO of UnaliWear and Kanega Watch in this case study featured in Austin Monthly.

The founder: Jean Anne Booth
The idea: A medical alert device that older adults will actually want to use.
Biggest challenge: “Getting funding, both for a physical product—it’s more expensive than an app—and a product for the aging demographic,” says Booth.
Wise words: “To succeed as an entrepreneur, you must be able to listen to feedback that isn’t aligned with what you want,” says Booth, “while staying tenacious about where you want to go.”

The Kanega Watch exists because Jean Anne Booth was worried about her mom. Joan Hall had just turned 80 and life couldn’t be better.

A former semi-pro model, she kept a busy social calendar while living on her own in San Antonio. But there were things that concerned her daughter, like when Hall took her pulmonary medicine incorrectly. Booth tackled the situation with the pragmatism characteristic of her background as an engineer and CEO. “I knew Mom was getting a little frail, so I researched the options,” she says. But when she showed Hall a spreadsheet of alert devices, “She looked at me with her teeth clenched and said, ‘Don’t get that for me. I’m not wearing it.’”

Booth couldn’t blame her. From big red “HELP” buttons to clunky plastic bracelets, medical alert devices for the elderly are embarrassing, inconvenient and ugly. Since Booth is a serial entrepreneur who has been a founder or leading member of three startups, two of which sold to Texas Instruments and Apple, she came out of retirement in 2013 to start UnaliWear and create the Kanega Watch, a stylish, easy-to-use device meant to empower rather than shame. Booth cites a Nielsen study that shows what people fear most about aging is relying on others. “So why do other products take away control?” she asks. “We set out to build a watch that extends independence.”

In production this summer for a release by the end of the year, the slim, stainless steel Kanega looks like any other watch. And while other devices are useful only in emergencies—summoning paramedics when a button is pushed—the Kanega offers options. A friendly voice relays directions home if the wearer gets lost, and the watch learns medication schedules and issues reminders. It’s powered by voice commands, can speak directly to hearing aids and is waterproof (most falls happen in the shower). And unlike other alert devices, it doesn’t tether the user to their home.

(Trying to get through school to succeed with a million dollar idea?  Checkout this Exam resource.)

Booth, who has raised $3.4 million in seed money, says that securing funding has been tough. While investors in the elder care industry immediately love her idea, others don’t always get it. And when asked what it’s like to be a woman selling a product for seniors within Austin’s young, male startup scene, she chooses her words carefully. “Everybody has challenges,” she says. “Yes, discrimination is real. But the other side of it is that I have 30 years of experience. I’ve raised a lot of venture capital and sold my previous startups. That gives me an edge.” And her idea, Booth says, could change the lives of the 84 million Americans who will be over 65 by 2050. Now she’s betting that consumers will agree.